This project started in late 2010, when I was just getting started with Arduino. I was looking for a way to make a two-axis gantry system for a homebuilt CNC system, but at the time didn’t have access to anything resembling machine tools.

I realized that an Etch A SketchTM has a pre-manufactured 2D motion system, and all I had to do was learn how to control the knobs. It turns out that they’re not really precise enough for the application I had in mind, but during the process of exploration I ended up with a way to print photos on an Etch-a-Sketch.

Any photo. Once I take the beads out of the Etch A Sketch the image is permanent.

Here’s the machine that actually does the printing:

The microcontroller for Etchasketchulator is an Arduino UNO board

It drives a pair of small stepper motors with EasyDriver boards

. I’d originally tried to drive the steppers directly from the Arduino but after a few days of frustration I broke down and ordered a pair of EasyDrivers. Money well spent.

So how does the process work? I start with a photo of one of my kids at a Renaissance Fair.

Our family spends way more time at these places than we probably should.

Take the photo and use Adobe Photoshop to convert it to a 1-bit image. Do some cleanup here and there and you wind up with an image that looks like this: 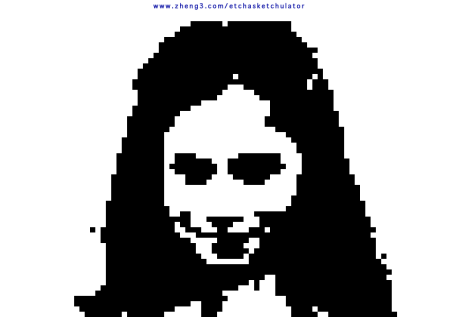 The next step doesn’t lend itself to photos, unfortunately. Use the free command line tool ImageMagick to convert the bitmap into a text file, and then a Python script to format the 1’s and 0’s so it can be sent over USB to the aforementioned Arduino board.

Now that I sum it up in one sentence it doesn’t sound like a lot of work.

Version 1.0 had a kludgey solution to attaching the gear assembly to the Etch A Sketch knobs. It was a milk cap epoxied to a nylon gear. It wasn’t quite big enough to fit exactly on the knob, so it needed some closed-cell weather stripping to keep it in place.

But these knobs took forever to attach. You had to put some Gorilla Glue on the weather stripping to keep it from shifting around during a print, and occasionally the epoxy would crack and then it’s another day’s wait before I can print again, plus the tucking of the weather stripping into the knob with a sharpened popsicle stick and man I can’t believe I stuck with a process that took minimum 24 hours to get a print going.

Then my MakerBot Replicator arrived, and I was able to print a gear assembly with holes in it that can be attached to a knob with four grub screws.

I know that in the US they’re called set screws. Apparently they call them “grub screws” in the UK, and I think that sounds cooler.

Now I can take an Etch A Sketch out of the box and have it printing in five minutes, assuming the photo processing is already done.

Once the print is complete, the next step is permanently fixing the image on the toy. This gets messy fast. The first thing to do is drill a hole in the back of the Etch A Sketch to drain as many plastic beads as possible. These little guys go everywhere and are covered in aluminum dust. Definitely wear a respirator if you try this at home, unless you want your bronchi to look like silver Sharpie markers.

Once the beads are out, it’s a simple matter of strapping the toy into a jig and Dremeling off the back. Actually, it’s not simple at all– it makes a huge mess, silver powder goes everywhere, you get silver crap on your lens, and your skin ends up feeling like Buddy Ebsen from the Wizard of Oz before they recast him as the Scarecrow.

Here’s what the inside of an Etch A Sketch looks like: 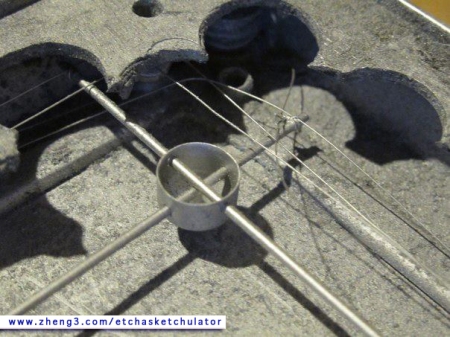 And here’s the stylus, the little nub that actually does the drawing. I clip the wires that control this so that the image can’t be accidentially changed by someone later.

Remove any remaining beads, glue a new back to the toy, and hang it on the wall.

What’s it look like up close? The rig draws a short line for a white pixel, and a little squiggle for a black pixel. 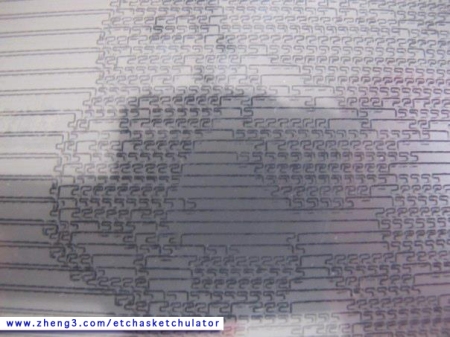 Depending on the resolution of the image, Etchasketchulator takes between eight and twelve hours to print. It’s not an unattended process; when I started printing photos my Holy Grail was pushbutton printing.

I’m still very far away from that– there’s a lot of tweaking and manual adjustment that goes on with the printing script, especially if the image starts falling out of register.

Version 1 of this device was all about getting it up and running. Proof of concept, really. It was made of scrap lumber and held together with drywall screws and Gorilla Tape. Gods help me I love Gorilla Tape.

Once I decided to get serious about the project, I invested some time in MDF board, thumbscrews, and acrylic sheeting to make adjustments easier. 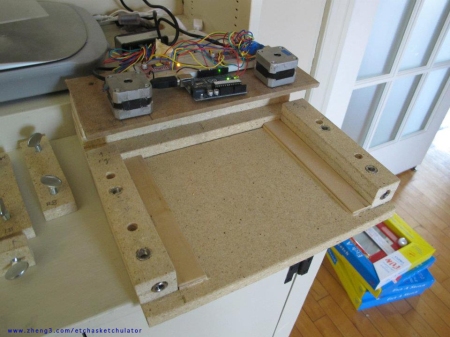 You can see a bunch of future projects in the background of the above image. I buy my toys in bulk from Amazon

. I’ve tried getting them at the local Toys R Us, but any Etch A Sketch that’s been sitting on a shelf has been doodled on so many times that the center has terrible burn-in and isn’t suitable for an art piece anymore.

When that whole “Mitt Romney is an Etch A Sketch” kerfuffle broke out in March I had to print one. I’m not made of wood, people.

Mitt was a good test for me; could I print something over which I didn’t have complete photographic control? Turns out I can.